I've been on Facebook for a few years now. In that time, I've learned about a few things that work well and don't work well for Christians on Facebook. Here is my advice:

1. Focus on honoring God. This is the most important advice I could possibly give to a disciple of Jesus Christ. Share a scripture or inspirational thought every once in a while. Share an encouraging word about what God has done, how he has answered prayer, or how faith in him has helped you.

2. Focus on others. Don't post too often about yourself or your life. Concentrate on demonstrating to others that you care about them. Let them know that you are praying for them when they are facing difficult situations. Take the time to "like" their photographs and status updates. Leave an encouraging comment when someone shares something good and wholesome. People don't post on Facebook in order to be ignored.

3. Avoid partisan politics. Your mission field includes Democrats, Republicans, and independents. You can affirm the value of life, the importance of marriage, the need to care for the poor, and the virtues of sexual purity without mentioning politics. You can be more effective when you avoid unnecessarily offending someone.

4. Avoid theological or religious discussion groups. You can get bogged down in useless arguments with "experts" when you join such groups. It can be more than a waste of time. It can be counterproductive.

5. Be careful with using humor. Sarcasm is especially dangerous. It can be easily misunderstood and unnecessarily offensive. Certainly humor can be used, but make it lighthearted and fun.

"Live wisely among those who are not believers, and make the most of every opportunity. Let your conversation be gracious and attractive so that you will have the right response for everyone" (Colossians 4:5-6, NLT).
Posted by Terry Laudett at 10:09 PM 2 comments: 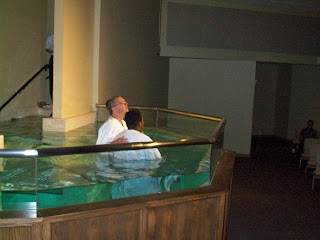 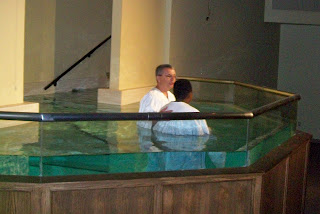 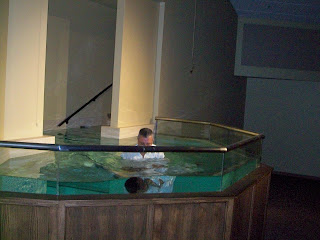 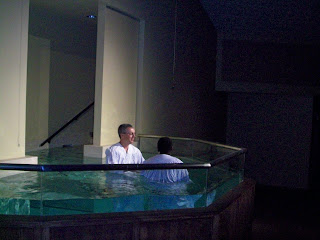 Before his baptism, I asked my son Chris to write a few sentences about why he was being baptized and what it meant to him.  This is what he wrote:

Posted by Terry Laudett at 2:38 PM No comments: 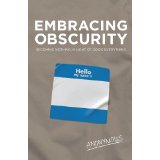 Embracing Obscurity by an anonymous author encourages Christians to embrace humility, contentment, and unnoticed service rather than to seek after attention, influence, and wealth. It's a powerful and important message.
Here is an excerpt from the introduction:

"We're drunk all right. We're intoxicated with a desire to be known, recognized, appreciated, and respected. We crave to be a 'somebody' and do notable things, to achieve our dreams and gain the admiration of others. To be something--anything--other than nothing.

"Whether you're an athlete, postal worker, missionary, or government employee, haven't you felt the insatiable draw of notoriety? Where do you think that comes from? We live in a culture that bases significance on how celebrated, or common, we are. And now the church seems to have followed suit. This is serious stuff. It's serious because of its source. It's just the sort of lie that Satan--the father of lies--manufactures and sells best. It's not too shocking. It can be justified and religious-sized and explained away easily enough. But it kills with the same force as the 'big sins' from which we distance ourselves.

"We all feel it. We all sense the power of this problem, even if we only see the tip of the iceberg. Yet even as our intoxication draws us away from our Maker and His mission, we're not sure what to do with it" (pages 1-2).

This is a good book...a challenging book. I received it for Christmas, but you can find it at a local bookstore or online at places like amazon.com. If you are up for a challenge, please check it out.
Posted by Terry Laudett at 7:29 AM 2 comments:

This is the video of our adoption story as it was seen today on the campuses of Cedar Ridge Christian Church in Broken Arrow, Sapulpa, and Coweta.
Posted by Terry Laudett at 7:22 PM No comments: 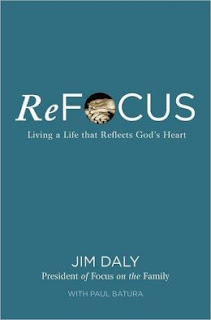 In ReFocus, Focus of the Family President Jim Daly challenges readers to confront the problems in our society with humility, kindness, gentleness, grace, and conviction.

Jim Daly recognizes that our culture has deep problems. He sees the deterioration of families, the violence within homes and on the streets, abortion, the acceptance and promotion of sexual immorality, alcohol and drug abuse, and numerous other issues with which we are dealing. He knows the temptation to self-righteously condemn people who struggle. He understands the temptation to focus on political and legal solutions to these problems. And he understands that we live in a time in which our culture has become increasingly hostile toward Christians and our worldview.

However, in this book, Mr. Daly does not focus so much on the problems of our postchristian culture as he does on the attitudes that followers of Christ should internalize as we try to have a positive influence within it. He calls on us to engage humbly and respectfully with people who disagree with our perspective. He emphasizes kindness and grace.

I appreciated this book. Jim Daly did an excellent job of promoting the Christian virtues of humility and kindness without sacrificing biblical ethics and doctrine.
Posted by Terry Laudett at 6:00 AM No comments: 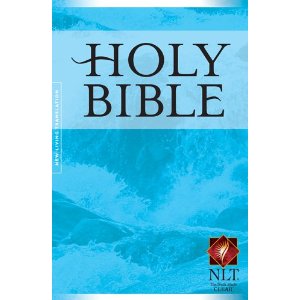 Over the years, I have read through the New King James Version, the New International Version, the New American Standard Bible, and the English Standard Version. I have appreciated each translation. It's a nice privilege to live in a place and time in which the word of God is available in a variety of versions.

A couple of years ago, I received the New Living Translation of the Bible as a Christmas gift. Over the last year, I have read through it too.

At first, I was a little skeptical about the translation. I doubted that it would convey the message of Christ accurately. After all, it was a translation that was based on a paraphrase of the Bible. How accurate and trustworthy could it be?

Then, I looked at the list of scholars on the translation team. I recognized the names of Darrell Bock of Dallas Theological Seminary, Scot McKnight of North Park Seminary, and D.A. Carson of Trinity Evangelical Divinity School. I began to understand that this was not a list of lightweights among biblical scholars. These translators have a great deal of expertise in understanding the text.

As I began to read the NLT Bible, I found it refreshing. It does not follow the word-for-word translation philosophy of the New King James, New American Standard, and English Standard Versions. Instead, it focuses more on accurately conveying the thoughts within the text, much like the New International Version does. As a result, I came across several passages which were easier to understand in the New Living Translation.

For example, Philippians 1:20 in the ESV reads:

"as it is my eager expectation and hope that I will not be at all ashamed, but that with full courage now as always Christ will be honored in my body, whether by life or by death."

While that passage can be understood in the ESV, I found it easier to read and comprehend in the NLT because the language is much closer to the way I speak and think. In the NLT, it reads:

"For I fully expect and hope that I will never be ashamed, but that I will continue to be bold for Christ, as I have been in the past. And I trust that my life will bring honor to Christ, whether I live or die."

I have been so impressed with the New Living Translation that I have made it my primary translation for reading. (However, I have not found a better study Bible than the ESV Study Bible. I will continue to use it as my primary study Bible.) If you have not read the NLT, give it a shot. It's worth it.
Posted by Terry Laudett at 6:01 AM 2 comments:

A Discussion of Biblical Inerrancy

This video features an important discussion on the doctrine of biblical inerrancy which took place recently on the campus of the Southern Baptist Theological Seminary in Louisville, Kentucky.
Posted by Terry Laudett at 6:08 PM No comments:

Terry Laudett
I am a Christian, a husband to Janet, and a father to Christopher. We are members of a church in Tulsa, Oklahoma (USA).

Pray for People to Know Jesus

My Goal in Life

Act with justice. Love mercy and kindness. Walk humbly with my God. (Micah 6:8)

One Church, One Family Can Make a Difference for One Child in Foster Care